Centuries of trade and looting mean that the amount of treasure that lies below the oceans, and other water bodies, is unknown and the vast majority of it will probably never be recovered. There are many diving expeditions that search for known shipwrecks, hoping to find their contents for both the monetary as well the historical value. To date the three largest treasures ever discovered under the sea are:

The loot recovered from this ship is estimated to be worth U$400 million, and counting. The Whydah Galley was a pirate ship belonging to Captain ‘Black Sam’ Bellamy, who was the wealthiest pirate the world has ever known. The Whydah Galley had originally been a slave ship which the Captain captured. He gave the survivors the ship that he had arrived on, and took over the Whydah as his flagship. Eventually, it sank with a large amount of stolen cargo on board which remained lost for a long time.

In 1984, it was relocated by Barry Clifford after many years of searching, and the recovery of the ship’s treasures began. Even though a significant number of items are still being found at the dive site, over 200,000 have already been taken out including gold, jewellery, cannons and coins. These are displayed around the world in an immensely popular National Geographic Society exhibition entitled ‘Real Pirates’

In preparation for its journey back to Spain, this trade ship took two months to load before it could set off. Unfortunately, a short time later it sank near the Florida Keys in 1622 with its cargo consisting of gold, silver, jewels and indigo. Despite numerous efforts, that lasted many years, the Spanish were unable to recover it.

In July 1985, Mel Fisher’s 17 year search finally proved successful when he discovered its location. 20 years later the cargo is still being brought to the shore, but U$450 million worth of treasure has already been recovered. 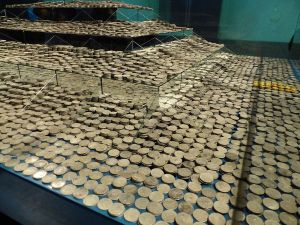 The US Odyssey Marine Exploration has made many amazing dive finds, but their greatest is by far the recovery of a ship in 2007. The project was called the Black Swan Project and they secretly flew 17 tons of coins from Gibraltar to the United States. The Spanish government filed a claim to the treasure on the grounds that the discovery had been the cargo from the Nuestra Senora de las Mercedes, which sunk off the coast of Portugal.

After being brought in to investigate the origin of the coins, experts were more astonished at the size of the recovery than anything else. After 5 years of dispute the treasure was rewarded to the Spanish government, and most of it is now displayed in museums throughout the country. The estimated value of the coins, which have been recovered from this project, is a mind-blowing U$500 million.

Like Loading...
← John D Macdonald – The Mastermind behind Travis McGee
Christ of the Abyss – An Underwater Depiction of the Saviour →