Get Three Bestsellers for the Price of One 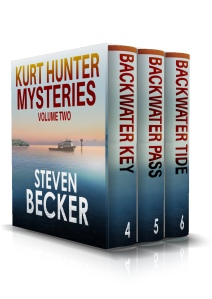 Backwater Key
Would you commit a murder if no one was watching?
Congress can’t pass a budget and Biscayne National Park is paying the price. With Special Agent Kurt Hunter out of work, two rivals gangs start a turf war in the park. But when a body is found hanging from the railing of the iconic Boca Chita Lighthouse, Kurt refuses to sit back and fish while the gangs take over his park.
Lies and deceit run rampant through the gangs forcing Kurt deep into the labyrinth of Miami’s counterculture to solve the murder.

Backwater Pass
How many lives is a cover-up worth
When a bridge collapses and kills six people, National Park Service Special Agent Kurt Hunter is drawn into a tangled web of political machinations. With the bridge debris scheduled to be turned into an artificial reef in the park, Kurt and Justine are in a race against time to find the party responsible.
But things are not as simple as they appear and soon powerful political figures turn the case into a power struggle to save one of the countries biggest universities.

Backwater Tide
There is one word that brings out the worst in people: TREASURE.
When special agent Kurt Hunter finds a boat adrift in the Biscayne National Park with the dead body of a famous treasure hunter aboard, the race is on to find his killer. Alliances shift and the bodies start to pile up as Kurt and Justine navigate the devious and dangerous world of treasure hunters to find the killer.
From the iconic Intracoastal Waterway of Miami to the beauty of the Biscayne National Park, this new mystery from bestselling author, Steven Becker, reveals the good, the bad, and the ugly of South Florida.