“A gripping tale of pirate adventure off the coast of 19th Century Florida!”

After decades at sea, pirate legend Jose’ Gasparilla is prepared to retire. As he and his crew split their treasure, the promise of one final prize lures the ship back into action. Little do they know that the purported riches are nothing but a trap set by the fledgling U.S. Navy!

THE WRECK OF THE TEN SAIL – TIDES OF FORTUNE: Book 2

Blown off course by a storm, Nick and the handful of men remaining from Gasparilla’s crew find themselves and their fortune in dire straights in the Cayman Islands. Double crossed by the islands governor, Nick must find a way to keep the crew together, rescue Rory and recover the confiscated treasure.

A fortune in gold and the future of a nation are at stake. King Henri is dead leaving Haiti in disorder and his treasury empty. A mysterious crewman is able to interpret a series of cryptic clues leading the crew on a chase through the mountains and fortresses of Haiti. With his own goal of taking over the nation, the political intrigue builds, but nothing is as easy as it seems.

On the run from his past, Nick and the crew of The Panther have enough treasure aboard to live like kings, but nowhere to spend it. Not all the crew agrees on his plan, and after a near mutiny, the crew decides to try for a new start 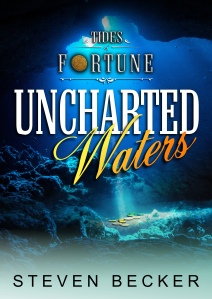 On the run, Nick and the gang take off for parts unknown in an attempt reach the Pacific and what he hopes to be a new life. But things are never easy and when the crew is captured, Nick is forced back to his old haunts to save them.

The Caribbean isn’t a place where Nick and the crew of the Panther can sail freely any longer, so they set off on their biggest adventure yet: Around Cape Horn to join the San Francisco Gold Rush.

The opportunities in the lawless gold fields are uniquely suited to the crew’s abilities—and eerily similar to their pirate past.