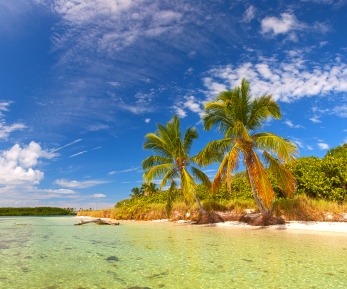 The Keys were originally inhabited by Tequesta Native American Indians. Later they were found by Juan Ponce de Leon in the early 1500s. De Leon had his own name for this paradise—he called it Los Martires as he believed the islands looked like suffering men from some distance. The name “Key” comes from the Spanish “cayo” which means “small island.” For many years, Key West was the largest town in Florida. Growing rich on trade, it was perfectly located for trade with the Bahamas and Cuba and was on one of the main trade routes from New Orleans. However, improved navigation led to fewer shipwrecks, and Key West went into decline towards the end of the nineteenth century.

Living in the Florida Keys has been likened to living in Caribbean. They share a similar climate, but the Keys were built by plants and animals as opposed to the Caribbean’s extensive volcanic islands. The Upper Keys islands are built upon limestone grains produced by plants and organisms. The Lower Keys are the last remnants of large coral reefs that became exposed as the sea level declined.

The Florida Keys is home to varied plant and animal specials, many of which cannot be found elsewhere in the United States. The climate is perfect for some imported plants, especially landscape plants in the South. However, this has its downside as many exotic species of plants that arrived as specimens or landscape plants now invade and threaten natural areas.

Ask anyone in the Florida Keys about the dangers of living there and they will tell you about the tropical storms and hurricanes which often lead to evacuations of the mainland. Hurricane George flew in in 1998 from the Caribbean and flooded the Lower Keys before heading to Mississippi. Recently, Hurricanes Katrina and Wilma affected the keys—none hit, thankfully. 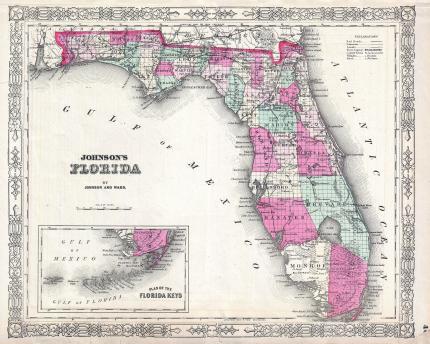 The 125-mile-long arc of islands that comprises the Florida Keys creates a fishing environment unique in the world and means a noteworthy or at least edible catch is possible virtually any time of year.

Florida Bay, edged by the “inner” curve of the Keys and the Florida mainland, is referred to locally as the backcountry, home to five of the most sought-after game fish among recreational anglers: bonefish, tarpon, permit, redfish (red drum) and snook.

Off the Keys’ “outer” curve and nearby Gulf Stream lies the Atlantic Ocean. In these deep-sea areas are some of the greatest sport fish in the world: blue and white marlin, sailfish and swordfish.

Some residents have a separatist “Conch Republic” attitude and who can blame them? They live in a veritable paradise—a unique part of one of the most individual continents in the world.