Connections in the Florida Keys – The Bahia Honda Bridge 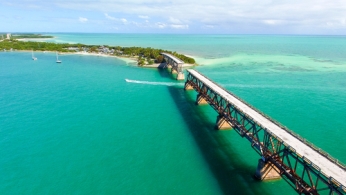 Many of the islands that make up the Florida Keys are popular tourist spots, including Bahia Honda. It can be found in the Lower Florida Keys and even though it has no permanent residents, the island is home to the 524 acre Bahia Honda State Park. Founded in 1961, the park extends over most of the island and is known for its breath-taking beaches and excellent snorkelling.

The Overseas Railroad was built as an extension of the Florida East Coast Railroad to Key West, and operated from 1912-1935. As a part of this project, The Bahia Honda Railroad Bridge was built in order to connect Bahia Honda and Spanish Harbor Keys. It was constructed by William Krome and Joseph Meredith, and the entire Overseas Railroad was funded by Henry Flagler. The rest of the project was designed with a concrete arch but because of the additional depth of the Bahia Honda channel, which is 24ft at its deepest point, this section of the bridge was built with a steel truss construction.

In 1935 much of the line was destroyed in a fire and the Florida East Coast planned to abandon most of the Overseas Railroad, including the bridge. It was purchased by the State of Florida, however, and converted into a highway in 1938. The lower level of the bridge was too narrow to accommodate two lanes, so this was accomplished by re-decking the top for the vehicular traffic. At the time, this became the primary way for visitors to access The Lower Keys, as well an evacuation route from the area. 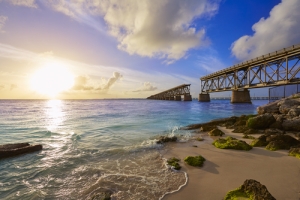 In 1980 a four-lane bridge was built a hundred yards north of the original, which replaced the main route to the island. At a later date, two truss spans of the old bridge were also removed to allow boat traffic to pass. This created a gap in the bridge which many people find quite scary when walking along it. Recent visitors to the original bridge will have noticed that it is in a state of disrepair, with several warning signs about the possible danger from falling debris.

Despite the condition that the bridge is in The Bahia State Park does its best to maintain it, and on the Eastern most section it is possible for tourists to get a scenic view of the area. On a clear day sea turtles, several species of fish as well as large rays can all be seen swimming below. There are also many adventurers who get a thrill from diving off of the bridge into the sea. This is a popular pastime in Florida where the water is warm and inviting, and is called bridge diving.