Diving has become an extremely popular hobby, and many people travel long distances in order to experience the views of underwater caves, rare sea creatures and the galleys and holds of sunken ships. There are also some one of a kind dives that feature unexpected underwater wonders. These include:

1. The Wreck of the St. Chamond

Also known as the Train Wreck, this site is located 1.5 miles off the coast of St. Ives, near Cornwall. On April 30, 1918, during WWI, the St. Chamond was transporting steam locomotives to France to when it was hit by a torpedo and sunk. The ship has been destroyed by the waves but the trains are still fantastically preserved. Divers have been unable to agree on the exact number of trains that are there, however, although most people can spot between 5 and 7 on their visits.

The trains of the St. Chamond are not the only ones that have their final resting place beneath the ocean. The Neptune Memorial Reef is an underwater cemetery located off the coast of Miami, Florida, approximately 45ft beneath sea level. It consists of a 600,000sq ft man-made reef, which is currently the world’s largest artificial one. Those that have opted to be buried here are cremated and mixed with cement, sand and water, and then moulded into their chosen shape. Plaques are placed beside each one with a message that their loved ones have requested.

The Mexican government commissioned the world’s most extensive museum beneath the sea, Cancun Underwater Museum, in order to encourage divers to move away from the site of the Marine National Park. The museum consists of in excess of 400 statues, made by British sculpture Jason de Caires Taylor. Each one looks amazingly lifelike and they transform daily, because of the ocean life which surrounds them and the coral’s growth, so that divers can enjoy seeing them on many different occasions.

Located in Antarctica, McMurdo Sound is an area where divers break the ice to plunge into water that is -1.8 degrees Celsius. The view below is worth the freezing temperatures, however, because there is 300m of unbelievably clear water with a glowing blue cover of ice. Only specially trained and extremely skilful divers are allowed to attempt this dive. 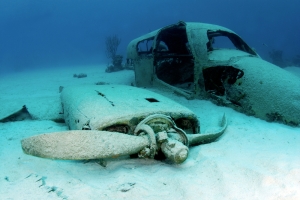 As part of the start of an artificial reef, a 727 aircraft was sunk off the coast of Key Biscayne, Miami in 1993. It was originally anchored at 82ft below water, but split in half after being hit by hurricane Gordon in 1995. One half remains at the original site but the tail is now 110 ft. below sea level. Covered with soft corals and spiny oysters, the aeroplane wreck is also known as the Spirit of Miami and is rumoured to contain a time capsule which is scheduled to be opened in 2043, if one of the site’s regular divers doesn’t find it first.

One Comment on “A Diver’s Paradise – 5 Unusual Underwater Sites”