A personal message from Kurt Hunter

I want to thank you all again for making Steve’s books such a success. He ran a promo of Backwater Bay a few weeks ago and it reached #29 in the entire Kindle Store.

It looks like my stories have turned into a series. Steve and I would like to announce the release of the third book: Backwater Cove which will be available on April 3. The fourth book, Backwater Key is available to preorder now and will be released May 21st. I’ve been bugging Steve to write the next Mac Travis Adventure. He says he’s on it and you can look for that release sometime in August.

Backwater Cove has some cool locations. It’s got Adams Key, where I live as well as South Beach and Miami. Some of the main action happens in a place called Stiltsville.

Development of the outer islands in Biscayne Bay started in the 1920s and 1930s. A lot of it fell under the “get rich quick schemes” which South Florida is notorious for. There are deep water canals that go nowhere and cleared areas that may or may not have been built on. The eye of Hurricane Andrew passed over the bay in 1992 erasing a good deal of it.

Stiltsville was started in the 1920s. Located a mile offshore in the shallows of the bay, the purpose of the original structures was to avoid prohibition. After 1933, the area became better know for gambling as it was legal then then if you were one mile from shore. At its peak the community totaled thirty structures. A few of the older clubs were Crawfish Eddies, The Calvert Club, and The Quarterdeck Club. Later on Party Central, The Miami Springs Power Boat Club (which still remains), and The Bikini Club.

“Off Key Biscayne is a renegade village on stilts where weekend residents live by their own laws. Their town hall is a floating Bikini Club that swings both day and night.” – Ward Kennedy from a 1967 article Bikinis on Stilts.

Hurricane Betsy in 1965 was the beginning of the end for Stiltsville. Following the storm fees were charged, permits ceased, and any structure with over 50% damage was to be removed. Over the years the number of buildings have dwindled to seven, which are now in a trust.

If there were a bad neighborhood in the park, Stiltsville would be it and it lives up to its reputation in Backwater Cove. If you want to follow along with the locations, I have updated the Google Map – CLICK HERE. 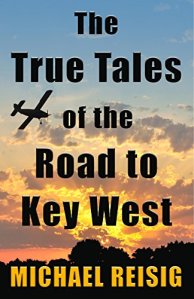 If you want some more true-life Keys adventure, be sure to check out Michael Reisig’s latest: True Tails of the Road to Key West