The Story of “Black Caesar” 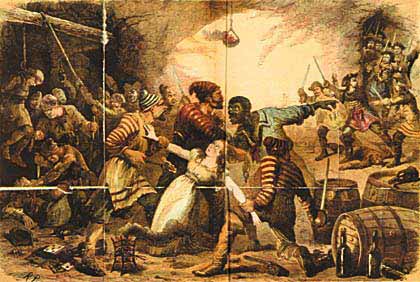 One of the most fearsome pirates was called Black Caesar. Together with his band of ex-slave pirates, he stalked the Florida Keys.
According to accounts from the time, Black Caesar started life as a respected African tribal chief. He was known throughout his nation as a man of formidable strength, intelligence and for being huge in size. He was one of the last tribal chiefs to be captured by slave traders—and was only caught when he and twenty-five of his warriors were trapped on a slave ship by a slave trader who had shown the chief his watch. Contemporary accounts report that Black Caesar was promised more objects if he went to the boat. When Caesar arrived on the boat, he discovered the trap and tried to fight his way back to shore. Many of his warriors were killed in the fight, and eventually, the well-prepared sailors managed to take Caesar down below in chains.
As the slave trader’s boat neared the coast of Florida, a huge storm threatened to sink it. A sailor, friendly to Black Caesar, sneaked below decks to free him, and the two of them forced the captain and his unwitting crew into a corner at gunpoint and boarded one of the longboats with supplies. The wind was blowing in the right direction, and the longboat hit the shore. They were the only survivors.
Soon, they started to use their longboat to lure passing ships. They posed as survivors of a shipwreck and sailed out to ships that came into their path. As soon as they got close to these ships, they would bring out their guns and make demands. Their threats were taken seriously, and over several years, the sailor and Caesar amassed a vast fortune, which was buried on Elliot Key.
When Caesar and the sailor fell out over a woman looted from one of the vessels, their friendship fell apart. Caesar was forced to kill the sailor—and took the poor woman for his own.
As word of his operation spread, Black Caesar started to attract more pirates, and soon he had the firepower and numbers to attack ships on the open seas. He was smart enough never to face a militarized convoy and looked specifically for stragglers to engage. He also made excellent use of Caesar Creek and other inlets that ran between Elliot and Old Rhodes Keys.
It is rumored that he had a harem on his island with over 150 women seized from ships. He also had a prison camp where he kept prisoners for ransom. Although many have tried to find his treasure—no treasure has ever been found on his island.
Caesar left Biscayne Bay to join Blackbeard in the early 18th century. After Blackbeard’s death at the hands of Lieutenant Robert Maynard, Black Caesar was captured by the colonial authorities, convicted of piracy and hanged in Williamsburg, Virginia.