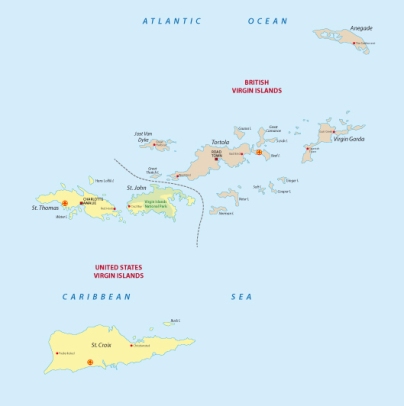 It was Columbus who first discovered the beautiful Virgin Islands on his second voyage to the New World in 1493. When he saw so many isles and cays, he named them after the virgin followers of Saint Ursula, who was martyred in the fourth century. The Spanish did not spend too much time on the islands, though, since they were unable to find gold there. They quickly set sail and moved on to gold-rich lands.

Pirates soon figured out a way to become rich off the Virgin Islands. The numerous hidden coves along with shallow waters and complex reef systems provided the perfect spot to pillage passing ships carrying riches from the New World back to Europe. The islands became a favored hangout of famous scoundrels such as Blackbeard, Bluebeard and Sir Francis Drake.

During the 17th century, both the British and the Dutch developed interests on the Virgin Islands. The British established and maintained control that allowed them to remain in power on the islands for over three centuries. They created an incredibly profitable sugar industry with huge plantations worked by African slaves. The abolishment of slavery in 1838, however, was the demise of the plantation economy; as a result, many European settlers returned home, and the islands returned to serenity.

From the 1800s forward, things stayed quiet on British Virgin Islands until the early 1960s, when Laurance Rockefeller and Charlie Cary essentially started the tourism boom there. Recognizing the tourism potential of the islands, Rockefeller developed the Little Dix resort on Virgin Gorda, and Cary established a marina complex on Tortola but made sure to allow the islands to remain a charming destination, unspoiled by overdevelopment similar to the neighboring U.S. Virgin Islands. Building codes stipulate that structures cannot rise higher than the islands’ very tallest palm trees, hence two stories is the limit for any building on the islands.

During the 1960s, the British Virgin Islands were given greater autonomy within the British Commonwealth. The islands have their own constitution and a local legislative council which handles island affairs. The governor, who is selected by the Queen, deals in external affairs and island security. Today these islands represent some of the greatest tourism attractions in the world. Holiday makers from around the world visit the islands to escape the stresses of the modern world—and who can blame them?