One of the most widely distributed fish in the world; the tuna can be found in several different oceans. All species of tuna are able to control the temperature of certain parts of their body. This allows them to keep themselves warm enough to operate at maximum efficiency, regardless of the temperature of the water surrounding them. Even though each species has its variations the majority of tuna have adapted for speed, with two closely spaced dorsal fins on their backs. The first of these is depressible and is able to lay flat in a special groove. Tunas also have crescent shaped tails with points at either end. Some of the more popular species are: 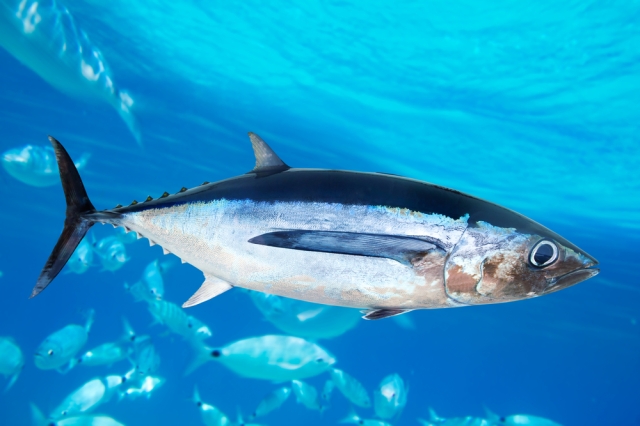 Having a life cycle of about 5 years, albacore can be found in Thailand, Indonesia, Spain, United States and Japan. They have dark blue backs, and their flanks and bellies appear blue-grey. Their meat is white and is normally compared to chicken in both texture and taste.

The most popular type of tuna for consumption, the Skipjack can be distinguished by 4 to 7 large stripes on its belly. Their backs are dark blue with a defined area of green directly above the pectoral fin. This fades towards the middle of their body, and they are well-known for having short fins.

Normally found swimming in the upper, mixed layers of ocean waters, the species has a life span of between 3 and 4 years. As a result of their frequent migration, Skipjack can be found in many different tropical countries. They mature quickly, at about one year, making it almost impossible for the species to be overfished.

Very similar in appearance to the yellowfin, bigeye tuna can be hard to spot from a distance. Up close, however, their large eyes and long pectoral fins characterise the species. They swim at greater depths than most other tuna, and because of this have a high fat content to provide insulation in colder waters.

This species has a dark blue or black back, and silvery sides. They can be found in the waters of the Northwest Pacific, Northeast Atlantic and the Mediterranean Sea. The member of the tuna family with the longest life cycle, the Northern Bluefin can live up to 25 years. This means that they become very large, and are also the rarest tuna. Their unique texture and high fat content makes them very popular in Japanese cuisine. As a result of their slow growth and over fishing the species is now threatened, causing a catching quota to have been implemented in some areas of the world.