Sidemount Diving – Exploration Under the Sea 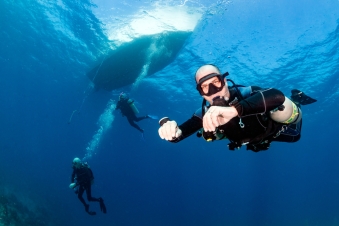 When exploring beneath the sea, there are certain difficulties that a diver will need to overcome. The technique of sidemount diving was developed in order to make exploration of underwater caves and wrecks an easier process. This is because the cylinders are stored beside the divers, normally below their shoulders and along their hips, instead of on their backs. During a dive, two or more cylinders are attached in this way using bungee cord.

This is especially useful when trying to get into smaller spaces, as the tanks can be removed and held in front of the diver while they squeeze through. Having them under the arms also means that they can block the majority of the water resistance that would normally be felt when diving. Divers are able to observe the cylinders constantly and be aware of the tank valves and regulators, and their position limits the amount of damage they receive. It also means that if a problem does arise it can be recognized quickly and solved as soon as possible.

This means that they are more easily transported and put on, especially in places with a limited amount of space. They are also more comfortable to wear, and can even be removed and replaced in the water.

There are three steps that need to be taken in order to become a certified sidemount diver:

This is the first stage where divers learn about the cylinders and other equipment. In order to move on they need to master adjusting, fitting and operating all of it, as this knowledge will be needed in the next stage.

This final level deals specifically with using sidemount diving to explore caves and wrecks. Students should be fully qualified in cave and/or wreck diving with lots of experience. They are then taught additional skills, which will be used specifically for handling demanding dives in these places. The main focus is to maximize using sidemount cylinders for confined areas.

Even though mainly used for cave diving and exploration, there is an increase in using sidemount diving for recreational and technical diving (recreational diving at a deeper level). This gives regular divers more freedom as they would normally have to rely on a diving partner to help change gear and monitor their regulators, but using a sidemount diving technique makes it possible for them to do it themselves.