Behind the Scenes: Tuna Tango

Tuna Tango comes from by background as a contractor. I took this job in 1993. With a reputation for taking on difficult projects, I was never one to turn down jobs that people said “couldn’t be done.” 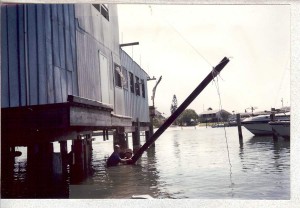 Although challenging, this was one of the most fun and rewarding jobs I have done. It was so out of the box that I would sit around drinking beer with one of my carpenters after work every day wondering if we should just give up. Then realizing that was not in either of our DNA, we drank some more and figured out the next thing to try. We experienced the jacks and beam blowing out, as in the book, and finally had the steel plates custom made to support the posts and keep them from slipping and sinking in the sandy bottom. I spent a lot of time in the water on that job, jetting and setting the poles as described. The construction detail in the book is exactly how we rebuilt the building. 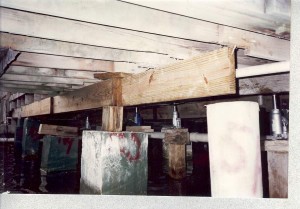 Yes, I bought the sailboat at the marina next door. At the time, I was living in Ft Lauderdale and the boat was more economical, and way cooler than staying in a hotel. And yes, It had bad karma.

The owner of the building did, and still does own a reputable fish house in St. Petersburgh. I’m not sure if he still owns the building in Pass-A-Grill, which is now a restaurant. He was one of the best customers I ever had. Lance has no resemblance to him.

I know most works of fiction are based on real people, although the disclaimers found at the beginning of books claim otherwise. Kyle and Dick are close to two guys that and used to work for me. Dick’s ticks and personality are real – believe it or not.

Here is an article from the St. Petersburgh Independent from March 1983. We did the work in 1992 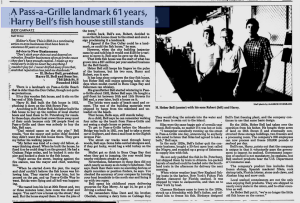